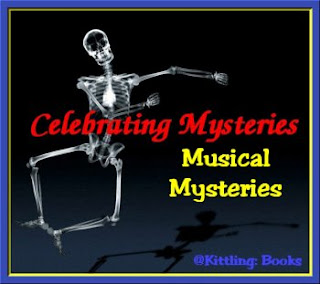 I can't believe that an entire month has flown by and it's now time to start in on the second month of Celebrating Mysteries! I hope that you enjoyed celebrating Irish mysteries last month, but now I'm turning April's focus to the musically inclined.

In case you think that I'm some sort of brainiac when it comes to mysteries, I'm not-- but I do know where to get help. For mysteries with a musical theme, I asked one of my favorite crime fiction think tanks for assistance.

If you love mysteries and have never heard of the Yahoo group 4 Mystery Addicts, you should seriously think about joining. It's free, and all the tips about excellent crime fiction are worth their weight in platinum. I'd like to give all the folks there a shout out for all their invaluable help. They're the best!

Music plays a role in many of our lives, so for the month of April, I'm going to talk about crime solvers who have a talent for music-- either singing it, playing it, teaching it, filling the air waves with it, or writing it. This first week, I'd like to shine the spotlight on singers.

There are more singers in crime fiction than you may realize. Hopefully the four authors I'll be featuring are a good mix of the familiar and the new. Don't be shy-- let us know some of your personal favorites because bookaholics always need recommendations for that next great read!

Author Deborah J. Ledford's first book, Staccato, is highly recommended by my 4 Mystery Addicts think tank-- so much so that once I investigated, I added it to my own wish list, but it's her second book that features a singer.(It's now on my wish list, too.)

Deborah spent her summers growing up in the Great Smoky Mountains where her novels and many of her short stories are set. She's been a screenwriter and a professional scenic artist on films and live theatre.

Her two published books, which both feature sheriff's deputy Steven Hawk are Staccato (2009), which has a classical music theme, and Snare (2010) which features rock music. 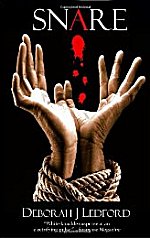 Here's a short description of Snare:

Native American pop singer/songwriter, Katina Salvo's career is about to take off. There's one problem: someone wants to kill her. Katina and her bodyguard, Deputy Steven Hawk, are attacked during an altercation at her first live concert. Could the assailant be a mysterious, dangerous man from her youth? Or her estranged father recently released from prison for killing her mother?

Performed against the backdrop of the picturesque Great Smoky Mountains of North Carolina , and the mysterious Taos Pueblo Indian reservation, Snare is a thriller fans of Tony Hillerman will appreciate.

Italian author Massimo Carlotto's life reads like crime fiction. In 1976 he was involved with a left-wing political group. When he stumbled across a dead body in his hometown, the police accused him of the murder. He fled to Mexico at the advice of his lawyer, and there he was betrayed, captured, and tortured before being sent back to Italy. He was sent to prison and received a pardon in 1993.

Carlotto's first book was an autobiography, but then he started to write a series of mysteries featuring Marco "Alligator" Buratti, a former blues singer and ex-con, who's working as a private investigator in Venice, Italy. 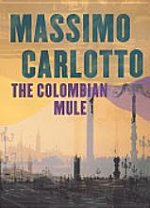 Here's a synopsis of The Colombian Mule:

When Colombian Arias Cuevas is caught trying to smuggle drugs through Venice airport, his fear isn't fuelled by the idea of prison. He's much more frightened of his aunt—it was her coke he took off with. The cops set up a sting to find out who was to be the recipient of the drugs, and art smuggler Nazzareno Corradi falls straight into the trap. But he's been set up. His lawyer hires "the Alligator," and his fixer, Max, to find out what's going on. Soon it becomes apparent why Cuevas was so afraid—the aunt, La Tia, has left a bloody trail in her wake, is now looking to do some business in Italy, and she's not about to let anybody get in her way.

Beverle Graves Myers graduated from the University of Louisville with a BA in History and an MD. She worked at a public mental health clinic before making the switch from psychiatry to full-time writing.

Her historical mystery series is set in eighteenth- century Italy and features Tito Amato who was sold as a child to be a castrato opera singer. 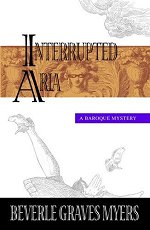 Here's what Publishers Weekly had to say about Interrupted Aria:

Myers's absorbing first novel, a historical set in 18th-century Italy, introduces a most unusual hero, Tito Amato, who was sold as a child to be castrated and taught to be an opera singer. In late 1731, Tito and fellow castrato Felice Ravello leave Naples for Tito's native Venice to sing with an opera company owned by a wealthy and powerful family. Myers recreates the opera seria of the time in fascinating detail, from the special stage effects to the vocal pyrotechnics. All Venetians attended the opera and sang the principal arias as popular songs; the narrative was less important and came primarily in spoken recitatifs.

During one performance, the prima donna is poisoned, and Felice, who's been working as an instrumentalist since his voice became unstable, is jailed as the chief suspect. Tito is determined to clear his friend and scours the Republic of Venice for evidence of his innocence. Readers familiar with Venice will delight in following Tito through the calli and campi where masked revelers celebrate the Carnivale. (One patrician lady uses a seduction technique that might be useful today.) The complicated plot has twists enough for a 19th-century opera, but Myers neatly ties all the pieces together by the end.

The fourth musically-inclined author is practically a law unto himself-- Kinky Friedman. Looking around his website is an adventure, and if you want to get in contact with this Texan, make sure you have an envelope, paper, pen, and a stamp-- he doesn't do email.

Back in 1984 he started writing a book about a character who was a country-western singer turned private investigator in New York City. The character's name? Kinky Friedman!

The series now has seventeen books that range all the way from 1986's Greenwich Killing Time to Ten Little New Yorkers in 2005. If you'd like information about the rest of the books in this series, check out Kinky's page on Stop, You're Killing Me!, which is one of the best resources on the internet for mystery lovers. 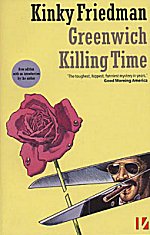 If you're curious about the first book in the series, Greenwich Killing Time (like I was), here's the description straight from Kinky's website:

The scene of the crime is Greenwich Village. The corpse is found holding eleven pink roses—and the suspects are as strange as the crime. A wild and witty journey into the dark heart of Manhattan, Greenwich Killing Time is the perfect introduction to America’s most outrageous singer-songwriter turned gumshoe detective.

Have I managed to whet your appetite for mysteries that sing to your powers of deduction? I hope so!  Next week, I'll be tempting you with heroes who might tickle the ivories, strum a guitar, or wield a bow. See you then!
by Cathy at Saturday, April 02, 2011