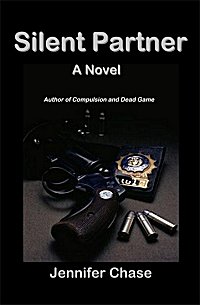 A prolific serial killer is leaving a bloody trail that will unlock one family's secrets while it tears a police department apart. Jack Davis, a K9 cop, finds himself falling in love with a suspect. Megan O'Connell, an agoraphobic, is the prime suspect in her sister's murder. Psychopath Darrell Brooks is on a mission to drive Megan insane. Everyone is a suspect. Everyone has a secret. If the truth is going to remain buried, someone is going to have to die.

Silent Partner is a fast-paced roller coaster ride with a surprising climax. I really enjoyed reading about crime fighting from the point of view of the police K9 units. It's something that I hope Chase continues in future books.

Chase also shows a talent for characterization. The bad guy, Darrell Brooks, aroused so much disgust in me that I wanted Keno and all his other four-legged buddies on the force to tackle him and chew on him for a long time. Even one of the victims who lasts for only a page or two is drawn with poignancy: "She eyed the stash. Her friend Tiffany was going to be so jealous. Maybe this guy was going to be her Richard Gere from Pretty Woman, she thought hopefully to herself."

As much as I enjoyed the characters and the story, I feel that the book needed more proof-reading and more editing. It's a rare book these days that isn't published with at least one glitch, but Silent Partner had more than its fair share. The tendency towards sentence fragments repeatedly threw me out of the story and interrupted the pace of the narrative. Like this one:

Darrell emerged from the other end of the alley kicking an empty whiskey bottle as he rounded the corner. Feeling better, relaxed, and wanted to get back to the anonymity of his car.

Detective Preston sat annoyed at her desk, cluttered with a mountain of paperwork. Eyes sunken, weary from the lack of sleep. Stuck with endless paperwork, glued to her desk without a break in seven hours.

I like the occasional sentence fragment; I use them myself. However, too many can break the flow of reading-- almost like a case of the hiccups.

Regardless of whether these things bother you, too, as a reader, Silent Partner is a fast, action-packed read with a K9 cop, Jack Davis, and his four-legged partner, Keno, at the heart of an engaging story. I will be keeping an eye on author Jennifer Chase.


Buy from Amazon.
Buy from The Book Depository.
Buy from an Indie Bookseller.
by Cathy at Thursday, March 17, 2011