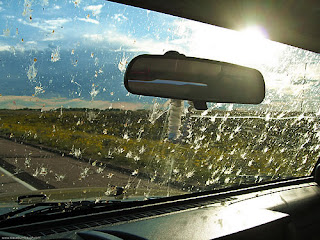 We've all had multiple turns at being both. Lately I've felt as though something was trying to turn me into a permanent bug, and sometimes it was an effort to peel myself off that glass.

I've had a Very Unwelcome House Guest called Cancer. Shortly after my birthday last month, I checked into the hospital and had a hysterectomy.

Let me tell you, that can certainly put a catch in your get-along. The drive home and the walk into the house the day after surgery almost did me in, but once I was in bed, I could handle it, and ibuprofen worked just fine.

Then I started having these extended sneezing fits that lit me up like a pinball machine. I was in a world of hurt, and I decided to break down and open that bottle of Percocet the doctor had prescribed. Denis cut one of the pills in half for me, and I took it.

You have no clue what a momentous decision that was for me. I don't do pain killers. If aspirin doesn't fix it, normally I just grin and bear it. I pass out within minutes of taking half a Codeine tablet, and when I read the label on the prescription bottle and saw "oxycodone" (AKA "hillbilly heroin"), I wanted nothing to do with it. But this pain was way above any that I'd had for decades. I think when I took that half a Percocet, I fully expected horns to start growing out of my head or something.

No horns. Just no pain. So as long as I had those sneezing fits, I took Percocet-- a total of five pills over the course of three to four days. Since the directions said one to two tablets every four to six hours, I was well below recommended levels.

The morning of the day I decided to stop taking them was rather strange. There was a mockingbird in the tree outside my bedroom window that was singing very loudly. I woke up with my lips moving in time to the bird's song and with my fingers plucking at the duvet in roughly the same time as the bird was hopping from limb to limb.

I crawled out of bed and went into the bathroom to check for horns. Or feathers.

Since the pain was gone, I stopped taking the Percocet, and in no time, I was experiencing more weirdness. My hands shook and made my handwriting look as though it came from an arthritic chicken being chased by a beagle pup. My fingers skittered all over the keyboard and my brain was so fuzzy that it took me four times as long to write a book review as normal. That night when I went to bed, I woke up suddenly in the wee hours absolutely drenched in cold sweat. If I hadn't known better, I would've sworn that someone had pulled off my duvet, tossed a bucket of ice cold water on me and then covered me back up. I could wring the water out of my nightgown and bedclothes.

What in the Sam Hill would've happened if I'd followed the directions on the bottle to the letter AND taken all forty pills?

I don't think I really want to know.

What I do know is that I will never take Percocet again. And there's something else. If anyone is ever able to prove to you that I have become a junkie, you can take one fact to the bank: The earth has just shifted on its axis. Drugs and me just don't like each other!

Want to know the most important thing about this entire post? Well, I'm glad you hung around till the end!

I had my post-op appointment with my oncologist this week. I'm doing an excellent job of healing, and I made Dr. Janicek laugh with my drug tales. Oh. And all those tests? They came back clear. Dr. Janicek got all the cancer during surgery. There will be no more whacking and whittling, and there will be no chemo. The Very Unwelcome House Guest has been Totally Evicted!

This time I was the windshield and Cancer was the bug. And when I walked past the door to the room where over a dozen women were undergoing their chemo treatments, it was all I could do not to cry.
by Cathy at Friday, February 18, 2011