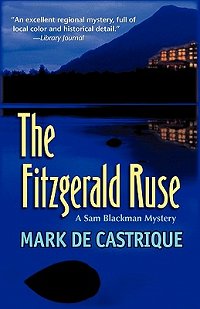 First Line: The night sky around Asheville can play tricks on the eye.

Former U.S. military CID officer Sam Blackman and his lover, Nakayla Robertson, have set up a detective agency in Asheville, North Carolina. Their first client, Ethel Barkley, is a bit eccentric and lives in a retirement home. Her request? To retrieve a lockbox which contains an F. Scott Fitzgerald manuscript. Mrs. Barkley feels the need to right a wrong she committed over seventy years ago.

No sooner than Sam and Nakayla have the lockbox in their possession than it's stolen and a security guard is killed. As Blackman and Robertson investigate, they find that either someone is killing to protect an American fascist organization that flourished in the 1930s, or rogue Blackwater mercenaries have come after the loot they believe Sam stole from them. Either way, Sam and Nakayla have to put together their evidence quickly before anyone else dies.

The strengths of The Fitzgerald Ruse lie in its plot, which is based on various historical occurrences in the Asheville, North Carolina area, and in its main characters of Sam Blackman and Nakayla Robertson.

Sam has come a long way since the first book in the series, Blackman's Coffin. In the first book, he was a bit too bitter and whiny after having had a leg amputated while serving in Iraq. (Yes, I do have a heart, and I do have compassion, but there comes a point when bitterness and whining start to detract from a story instead of giving a reader insight into a character.) In this second book, he's  come a long way in accepting what happened, and de Castrique adds several pieces of information which help the reader better understand amputees.

Nakayla Robertson is a strong woman and a good choice to be able to stand up to the rather forceful Sam, and their banter brings a welcome breeze of humor into the novel.

Do you have to read the first book in this series to have The Fitzgerald Ruse make sense? Absolutely not, but I'd suggest that you read it anyway for the amazing plot and for the first glimpses into the characters of Sam and Nakayla. I'm really looking forward to reading more of their adventures.