First Grave on the Right by Darynda Jones 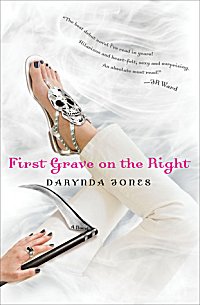 First Line: I'd been having the same dream for the past month-- the one where a dark stranger materialized out of smoke and shadows to play doctor with  me.

Charley Davidson sees dead people. She's the one and only Grim Reaper here on earth, and it's her job to convince these dead people to go into the light. However, if these dead people have been murdered, sometimes they can insist that Charley bring the bad guys to justice.

Take for example the three lawyers who've turned up dead. In no time at all, Charley's helping her Uncle Bob who's a detective in the Albuquerque Police Department. (Seems as though her father and her uncle both have received commendations and citations through the years for taking advantage of Charley's gift.) And when Charley isn't working on the dead lawyer case, she's trying to figure out the identity of the tall, dark, handsome and extremely sexy Entity who's been visiting her in her dreams.

As I read this, I liked Charley's sarcastic voice even though I knew that sarcasm was keeping me at a distance from this intriguing main character. The mystery was also a good one. What kept me from thoroughly enjoying this book was the fact that it felt as though Jones was making an all-out bid to capture Janet Evanovich's die-hard Stephanie Plum fans. Humor, danger, dead bodies, a main character who has a hard time paying the bills (and who's also named her breasts and ovaries), two sexy men who follow her around.... There's so much going on in this book that it's a bit frantic. And by the way-- the sex scenes in this book are a bit more explicit than anything Stephanie Plum has ever divulged to us, so keep that in mind.

Did I become a fan of Charley Davidson while reading First Grave on the Right? Not really. I found a lot to like, but I think it's going to come down to what happens in the second book in the series, Second Grave on the Left. Here's hoping Charley has settled down a tiny bit... and stopped naming her body parts.


Buy from Amazon.
Buy from The Book Depository.
Buy from an Indie Bookseller.
by Cathy at Friday, February 18, 2011