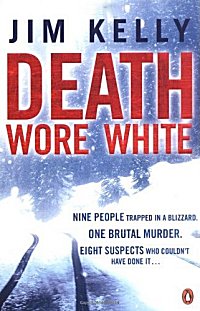 First Line: The Alpha Romeo ran a lipstick-red smear across a sepia landscape.

At 5:15 PM, Harvey Ellis was stranded in a line of eight cars by a blizzard on a Norfolk coast road. Three hours later, Harvey Ellis was dead, stabbed at the wheel of his truck. His killer has achieved the impossible: killing without being seen and leaving not one footprint in the snow.

This is merely the beginning of an exasperating investigation. The crime scene is melting, the murderer has vanished, and the witnesses have scattered. It's going to take everything D.I. Peter Shaw and D.S. George Valentine have to piece all the facts together and solve the case.

Shaw and Valentine are a very good pairing of opposites. Shaw is the young whiz kid on the fast track to chief constable and beyond. Known as "Check It" at the station, he's known for believing in the forensics and for checking each and every bit of evidence time and again.

His new partner, D.S. George Valentine, is at the end of a long career. He's a dinosaur, believing that people-- not forensics-- are at the heart of each investigation. Shaw and Valentine are both under a cloud: Shaw's father (and Valentine's former partner) left the force after it was proven that the pair did not follow procedure and seriously botched the outcome of an important case. The present-day partnership of Shaw and Valentine have to come to grips with the old case as well as solving the new.

Although characters and the weather play important roles in this book, by far the star of the show is the tightly wound and smartly executed plot. Clues are subtly planted and can be easily missed, and even though I eventually figured it all out, I refuse to claim any sort of victory because my enlightenment occurred so close to the end.

If you're in the mood to read about a couple of indefatigable coppers who are faced with an Agatha Christie-like locked room mystery in the snow, locate a copy of Death Wore White. (Just make sure the heating isn't on the blink, and you have a spare blanket just in case!)