The Arsenic Labyrinth by Martin Edwards 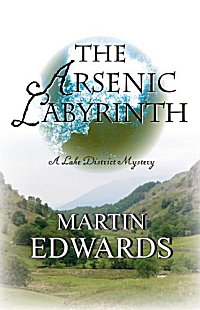 First Line: You'd never believe it to look at me now, but once upon a time I killed a man.

When a grifter returns to Coniston in England's Lake District and tips off a local newspaperman that he knows what happened to a woman who went missing ten years before, DCI Hannah Scarlett and her Cold Case Review Team re-opens the case.

Hannah's investigation takes her to the Museum of Myth and Legend and on to the remote and eerie Arsenic Labyrinth (a series of tunnels constructed to remove arsenic from ore). While Hannah is involved with her cold case, historian Daniel Kind is doing research for a new book on John Ruskin, whose neighbors built the Arsenic Labyrinth. It doesn't take Hannah long to discover that there are two mysteries to solve, and she enlists Daniel's aid. They have to hurry because someone out there has proven that they will kill to keep their secrets.

Edwards brings the Lake District to life in this series of crime novels, along with a sense of the small villages and the people who live in them. In places like this, history still matters although it may not seem so to much of the rest of the country, as one character laments:

"Perhaps it doesn't matter," he murmured. "These tales of the past, handed down through the generations. The sophisticates who live in our towns and cities have no truck with the tales and traditions of the countryside. Why should they, when they have broad minds and broadband?"

Even more than the story, the setting and the sense of history, the characters of Hannah Scarlett and Daniel Kind are the glue that holds everything together. They are so well-drawn, so obviously attracted to each other, that I'm sure I'm not the only reader who would like to shake some sense into each of them and push them together. The fact that they're both first-class investigators is icing on the cake.

If you're in the mood for an atmospheric mystery with a haunting setting, a touch of history, an involving mystery, and two excellent characters, by all means find yourself one of Martin Edwards' Lake District mysteries. Do you have to start at the very beginning? No, not at all. But with characters like Hannah and Daniel and a setting like England's Lake District, why deprive yourself?


Buy from Amazon.
Buy from The Book Depository.
Buy from an Indie Bookseller.
by Cathy at Sunday, February 20, 2011