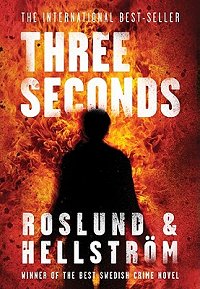 First Line: An hour to midnight.

Thus begins another edge-of-your-seat wild ride through Stockholm with the Swedish writing duo of Anders Roslund and Börge Hellström. It is a ride in which timing and preparation are everything to Piet Hoffman, an ex-con who's deep undercover for the Swedish police in order to sabotage the Polish Mafia's attempt to control drug distribution in Swedish prisons.

When Hoffman is witness to a drug deal that leads to murder, Inspector Ewert Grens, a relentless bull dog of a homicide detective, threatens to ruin the entire mission. Hoffman is sent to a maximum-security prison as the final segment of his assignment, but his handlers are afraid that he will tell of the government's illegal involvement in his task. As a result, they blow his cover while he's trapped in prison. With seemingly everyone wanting him dead, the odds against Hoffman's survival are overwhelming.

Having previously read and enjoyed Box 21 by the same authors, I had great expectations for this novel, and although the first third of the book was marred by a very slow pace while all the elements were put in place, I was not disappointed.

What I liked most about Three Seconds was the way in which Hoffman had to anticipate each and every single event that might happen once he is in prison and things are out of his control. The intricate plot with its layer upon layer of detail reminded me of similar elements I enjoyed in Stieg Larsson's Millennium trilogy.

If you've read Stieg Larrson and are wondering what's next, sample Roslund and Hellström's award-winning books. Just fasten your seat belt first-- once these two put the pedal to the metal, there's no letting up.


Buy from Amazon.
Buy from The Book Depository.
Buy from an Indie Bookseller.
by Cathy at Thursday, January 13, 2011