Scene of the Crime: Elizabeth Gunn

Welcome to the second edition of my new series, Scene of the Crime, where I get to interview my favorite crime fiction authors.

One of the books that made my personal Top Ten list in 2010 was Cool in Tucson written by Elizabeth Gunn. For me it was a book in which everything clicked: plot, setting, pace and characters. I'm thrilled to see that Kissing Arizona, the third in this series is now available because I want to continue getting to know Sarah Burke. 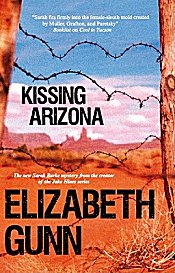 Here's what Booklist has to say about Kissing Arizona:

Feisty Tucson cop Sarah Burke is back in another outing that’s as much a commentary on modern social issues as it is a crime story. While Sarah is juggling three hot cases—a drug bust gone wrong, the murder-suicide of a local couple, and the discovery of a box of human remains—she also struggles with her home life, what with her adopted niece needing a room of her own, Sarah’s mother suffering a stroke, and boyfriend Will Dietz urging Sarah to move in with him.

Mixing the multifaceted plot lines with reflections on illegal immigrants, prostitution, blended families, work-life balance, working mothers, and the effects of the economic recession, Gunn somehow manages it all with panache. Fans of Muller’s Sharon McCone, Grafton’s Kinsey Millhone, and Paretsky’s V. I. Warshawski will want to add Gunn’s Sarah Burke to their list of female sleuths to follow.


It goes without saying that I can't wait to read this!

One of the things I always do when writing a book review is to check if the author has a website, and Elizabeth Gunn certainly does. Her own life is every bit as interesting as those of her characters. How many people do you know who can be described in this way: "a one-time innkeeper with a taste for adventure, Elizabeth has been a private pilot, sky diver, SCUBA diver, and liveaboard sailor."

Believe it or not, another word that can be used to describe her is "octogenarian", although with her lifestyle and wide-ranging interests, it doesn't seem possible. She writes two mystery series; the second being centered on the character of policeman Jake Hines in southeast Minnesota where she grew up. (Sarah Burke lives and works in the Tucson area, where Gunn now lives.)

If you're someone who's always wanted to be a writer but are enjoying so many other things that life has to offer, don't give up hope on being published. Why? Elizabeth Gunn didn't start her crime fiction career until she was in her seventies.

Let's see what she has to say in her interview!

LITTLE WOMEN.Even when I was nine I knew it was pretty smarmy—I remember laughing with my mother over some of the sanctimonious things Marmy said. But the story compelled me to read it.

Hike in the country around here—watch birds. Read, read, read.

If you go to Rochester, Minnesota now, besides the Mayo Clinic I want you to see: the new bioscience industrial park being built at Pine Island, the wind farms going up in several places, and the timeless beat of life on the Mississippi—Eagles and other big raptors, geese, ducks, all manner of songbirds.

In villains, a close call between Blue Duck in LONESOME DOVE and Hannibal Lecter in THE SILENCE OF THE LAMBS. For heroes, John LeCarre’s Smiley and Robert B. Parker’s Spenser.

What did you do the first time you saw one of your books on a shelf in a bookstore?

It wasn’t in a bookstore—I was swimming in an RV camp’s pool and saw a woman poolside reading TRIPLE PLAY. I came near drowning.

I was on a boat in the middle of Florida Bay. I guess I went out and yelled at the fish.

I once shared a signing with a naturalist who brought along her snake. Nobody heard a word I said—they were all watching the snake.

I love having my books on eBooks, since they give me the backlist that print publishers have never been willing to maintain for me. But they are bad news for bookstores, and I do love hanging out in bookstores. So it’s love/hate all the way.


In reading her answers, it's plain to see that Elizabeth Gunn is a woman who doesn't wait for life to come to her. Travel, reading, staying attuned to the natural world, becoming as fine a writer as she can be... this crime fiction writer enjoys each day as it comes.


Don't forget to stop by next Monday when my guest on Scene of the Crime will be the author of the Alafair Tucker mystery series, Donis Casey!
by Cathy at Monday, January 31, 2011