Murder in Mykonos by Jeffrey Siger 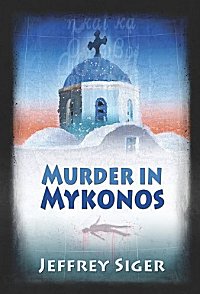 Athens, Greece knows just how to deal with hot-shot, outspoken, politically incorrect homicide detectives. Promoted out of Athens to serve as police chief for the island of Mykonos, Andreas Kaldis is certain his homicide days are done. He's going to be right in the middle of tourist heaven, and people just aren't murdered in such places. Famous last words, right?

When the remains of a young woman are found ritually bound and buried on a pile of human bones inside a remote mountain church, Kaldis teams with a savvy local homicide chief to find the killer before the news leaks out and destroys the island's reputation as a fun-- and safe-- place to party. Then a young woman disappears, and the race is on to identify a cunning predator.

I almost couldn't turn the pages fast enough as I read Murder in Mykonos. Siger put out a banquet for me, and I wanted to make sure that I didn't miss a crumb. Ancient and modern Mykonos was vividly brought to life, and Kaldis is a strong central character who longs to return to Athens-- and he's smart enough to know that the best way of doing that is by turning his department of officers fresh out of the academy into topnotch policemen.

The plot was engrossing as well, with a worthy villain whose devious mind kept him out of the spotlight and free to continue his spree. Tracking him down led me all over the island and into the history and lore of Mykonos which I really enjoyed.

As much as Kaldis wants to return to Athens, I'm hoping he'll stay on the island for another book or two. He and I both do well in such a beautiful setting!