The Edge of Ruin by Irene Fleming 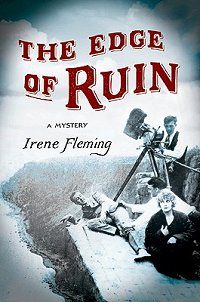 First Line: One sunny afternoon in the fall of 1909, Adam Weiss came home to the three-story Dutch Colonial house he shared with his new wife in suburban Philadelphia, hung his derby hat on the hat rack, and announced to her that he was selling his string of nickelodeons-- and everything else the couple owned-- to go to New York City and set himself up as a movie producer.

Having signed a contract that will ruin them if they don't turn in four completed movies in a month, there's no time to waste in selling everything, moving to New York, and putting together a cast of actors, props, costumes, and a camera man.

They've barely begun filming across the river in New Jersey when a former Pinkerton detective is murdered on set, and Adam Weiss is declared the killer and carted off to jail. Emily is left behind to continue filming so they won't lose everything and to find proof that will exonerate her husband.

The only thing I didn't like about this book was the fact that I immediately knew whom the killer was; otherwise, this was a very enjoyable book to read.

Having the book set during the early days of the movie industry when Edison had an iron grip on his patents and hired men to discourage any and all independent movie companies was a stroke of genius. Not only are there ideas for a million future books in this period, it's also fun and educational to read about the birth of one of our favorite forms of entertainment.

The book moves very quickly-- almost as quickly as those one-reelers Emily was producing-- and the characters are well drawn and grab the imagination.

Emily is young, pretty, and a former chorine on stage. Adam is handsome and extremely ambitious. Within a very few pages, these two gain more depth. All their possessions are sold, including a good part of Emily's wardrobe-- but not a stitch of Adam's-- which throws up a red flag concerning Adam's character. A little later when Adam is jailed and Emily is in charge of writing the storylines and scenes for the movies, Emily is shown to be highly intelligent, capable of taking charge, and not willing to knuckle under to threats-- not exactly the type of woman who's going to blend well with a man like Adam.

The history was fascinating, the story quick-paced and well-plotted, and combined with the growth of the two main characters, this all leads me to the conclusion that I've found another series of which to keep track.


Buy from Amazon.
Buy from The Book Depository.
Buy from an Indie Bookseller.
by Cathy at Thursday, January 27, 2011