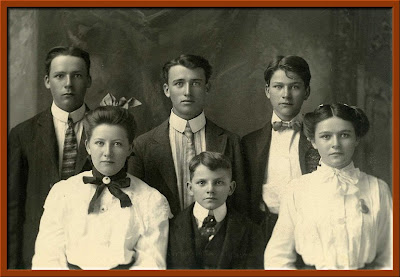 Yes, I've been at the family photos again (and of course you can click on them to view them full size). The young man in the middle of the back row happens to be my maternal great-grandfather. The rest of the group are his brothers and sisters. Good-looking bunch, aren't they? You'd never guess that, just a few years before this photo was taken, these children were orphaned. No one had much money at the time, so basically they were taken into the nearest town where relatives came and took the children they wanted.  Something mean-spirited happened to Aunt Sadie in the front row on the right, but that's another story. This story involves the little boy in the middle of the front row. See him? Meet Eugene Brown, known by all his family and friends as Gene. 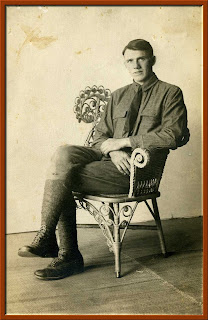 I was digging through a box of family photos and papers when I ran across this photo on the right.

This is Gene all grown up and part of the US Army in France during World War I.  I didn't even recognize him until I turned the photo over and saw "Eugene Brown" in my grandmother's handwriting. Then I could see that little boy in the group photo.

Uncle Gene was sent to Camp Zachary Taylor right outside of Louisville, Kentucky, so he didn't have far to travel from southern Illinois for basic training.

Camp Zachary Taylor was the largest training camp in the United States at that time, and they tried to make sure the men had everything they needed to stay in contact with their families. 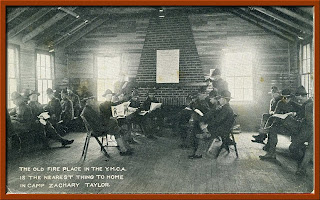 Almost the very next thing I found in the box was this postcard you see to the right. Picturing your loved ones relaxing in such a homelike atmosphere would be a lot easier on the nerves than thinking of them in the trenches, attaching bayonets to their guns and getting ready to go over the top. Postcards like these were undoubtedly a bit of propaganda for both the men and their families. 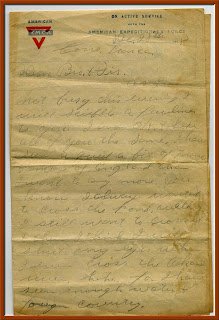 One thing I wish Camp Zachary Taylor had provided all their men was ink pens because, after almost one hundred years, this pencil has almost faded to complete illegibility!

This letter was written in France a little more than a month after the end of the war. Let's see how much of it I can read...


As I am not busy this evening I will scribble a few lines to you. I am OK. and hope all of you the same. I have seen quite a bit of France and more of England than I want to any more. You know I always wanted to cross the pond, well I still want to cross it & then I think I will shut my eyes when I even cross the Okaw River [now called the Kaskaskia River] ha ha. For I have seen enough water & foreign country.


We sailed from Montreal Canada the 2nd of Sept. & got 900 miles on our way & then went back to Quebec & got on another boat & landed in England the 25th of Sept. so you see we wasn't in any hurry crossing. & talk about riding the waves we did. We were in England till the 1st of Oct & then we landed in Cherbourg, France & then we had a train ride, (rode in box cars) south, down close to Spain. We were treated fine by the French. Slow days & then our Div.  were [illegible] & sent to LeMans, France. From there I started for the Front, but the Armistice was signed before we got there so we went to the 29th div & we are still in the north eastern part of France & don't know when we will leave for the states but hope it will be soon.


In this country it rains nearly every day, so we have mud instead of dust or at least it is that way since I have been here. I was in one place 13 days & it rained every day we were there. We just left a place where it was muddy, about knee deep. There isn't very many American farmers that would keep hogs in a place like it, but now it is O.K. for we are in a town.


We had a good Xmas dinner but the day didn't seem like Xmas. We didn't have any snow that day but it snowed a little the next day. We haven't had any winter yet but it gets chilly here & [illegible] but it will get cold if we don't leave here soon.  I hope you are having some real winter snow, but don't have to be out in it all the time.


Well I am going to close. From your bro. 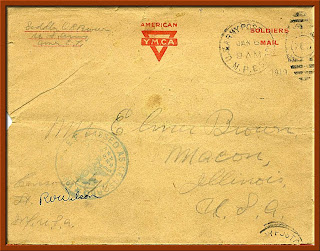 To the left you can see the envelope the letter came in-- as well as the stamp and signature of the censor who read it before it was put in the mail bag.

Even though Uncle Gene didn't really talk about much-- travel, weather and food-- it was obvious he was homesick. An Illinois farm boy so very far away from home.

Finding these papers from Uncle Gene was a very potent reminder. 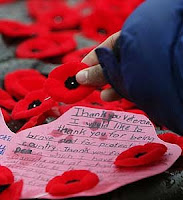 Thank you, Veterans, for your service and your sacrifice. If not for you, I wouldn't be enjoying the life I am now.