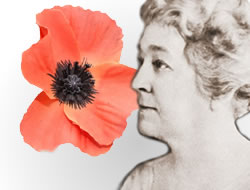 The Flanders Fields Red Poppy was first created as a symbol of Remembrance by an American teacher, Miss Moina Belle Michael.


As a result of Moina Michael's tireless campaigning, her complete dedication to the cause and the inspiration her idea gave to others, the delicate flower of the red field poppy has become an internationally-recognized symbol of Remembrance and welfare for war veterans. 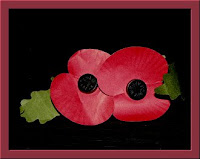 I found the above information at The Great War website. I was stunned to discover that the poppies were an American idea. Why? Two reasons, I suppose:

(1) I haven't seen poppies for sale in the United States since I was a child.

(2) The ones you see in the photo to the left? Denis and I bought them in England, where their Remembrance Day celebrations are something very special.

So often Veterans' benefits in this country-- to be blunt-- stink. Why can't we sell poppies again and make sure all the profits go to disabled veterans? Are we so materialistic and selfish that we can't afford the change from our pockets and purses? Have we as a nation really forgotten that freedom isn't free? 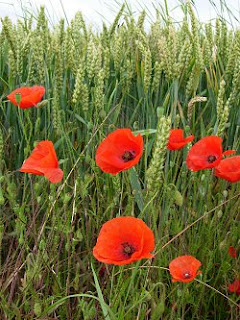 by John McCrae, May 1915
In Flanders fields the poppies blow
Between the crosses, row on row,
That mark our place; and in the sky
The larks, still bravely singing, fly
Scarce heard amid the guns below.
We are the Dead. Short days ago
We lived, felt dawn, saw sunset glow,
Loved and were loved, and now we lie
In Flanders fields.
Take up our quarrel with the foe:
To you from failing hands we throw
The torch; be yours to hold it high.
If ye break faith with us who die
We shall not sleep, though poppies grow
In Flanders fields.

Email ThisBlogThis!Share to TwitterShare to FacebookShare to Pinterest
Labels: Veterans