A Cotswold Killing by Rebecca Tope 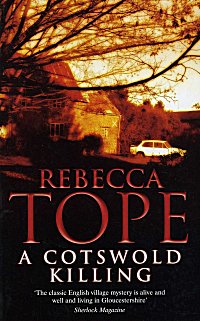 First Line: The pain in Thea's finger was intermittent, but sharp.

Recently widowed Thea Osborne has decided to house-sit, and Brook View Farm outside the picture perfect village of Duntisbourne Abbots in the Cotswolds looks ideal. Thea's only worry is that spending three weeks there with the owner's persnickety pages of instructions and three dogs might prove a bit dull.

Her first night's sleep is interrupted by a piercing scream, but since it wasn't close to the house, no one's dogs seemed bothered by it, and it wasn't followed by anything else suspicious, Thea did nothing. Nothing, that is, until she discovers the body of a neighboring farmer at the bottom of one of Brook View's fields. As the investigation unfolds, Thea finds herself talking to neighbors and uncovering bits and pieces of enough secrets and tragedy that she forgets all about her worry of being bored.

I enjoyed this book much more than I thought I would. That makes it sound as though I expected to dislike it, which isn't true. The setting became very real for me with two sentences:

Every roadway leading to the village centre was steep and twisting, with no clear vistas. Most of the houses escaped being overlooked by any of the others, producing a sense of solitude and secrecy that felt strange in the middle of a village.


If you're anything like me, that description is just the tiniest bit creepy. Who knows what goings-on and secrets can be found in a place with no clear line of sight and with none of the houses being overlooked? (I have to admit that the above description reminded me a bit of a drive through the Yorkshire Dales on one-lane roads, steep hills, and blind corners. What began as a white knuckle ride for me became enchanting due to one simple fact: in that part of England some of the politest drivers in the world are to be found.)

Besides the setting, I found that I really liked the main character, which is amazing because I'm normally very suspicious of anyone who's described as being beautiful. Yes, Thea is beautiful, but she's not obnoxious about it. She's not obsessed with clothing, shoes, makeup or hair styles. She occasionally uses her looks as a tool, having learned years ago that "it was amazing what a smile could do, accompanied by an open and innocent demeanour."

Thea's not obsessed by her appearance, she's not nervous about being alone in a strange place, and she shares what she knows with the police. As she gets to know various villagers, some are very forthcoming-- she won't be around for long, so it won't hurt to talk to her-- and some look at her with distrust. They've heard about Miss Marple, you see.

As I was enjoying my leisurely read in the Cotswolds, getting to know the village and its inhabitants, I actually found the answer to the mystery to be a total surprise because I'd forgotten all about searching for clues. I'm looking forward to reading other books in this series, although I do have one concern: if Thea stumbles into each mystery by house-sitting, won't she soon garner a reputation as The House Sitter of Doom? I think I'll enjoy finding out!

Buy from Amazon.
Buy from The Book Depository.
Buy from an Indie Bookseller.
by Cathy at Monday, October 25, 2010