A Bad Day for Sorry by Sophie Littlefield 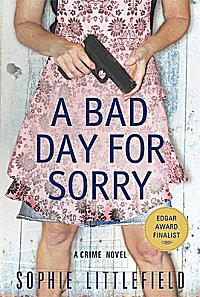 Just before her fiftieth birthday, Stella couldn't take it anymore. When her abusive husband laid into her, she dispatched him with a wrench. Now a few years later, she's so busy helping other women deal with their own abusive husbands and handing out her own brand of justice, there's scarcely any time left for her to run her sewing shop.

Stella works outside the law, so she's free to do whatever it takes to convince these violent men to stop what they've been doing. All she has to do is keep her distance from Goat Jones, the handsome local sheriff. When young mother Chrissy Shaw asks for Stella's help with her abusive husband, Roy Dean, it looks like just another day in Stella's office. But when Chrissy's two-year-old son is taken from her, Stella finds that she's got a lot more to worry about than skinny old Roy Dean.

A Bad Day for Sorry has to have one of the most memorable prologues I've read in years. Stella is an original; she endured an abusive husband for years, and as a result she tends to view things differently from those of us who haven't. Her own homegrown brand of justice must appeal to any woman who's found our existing legal system less than ideal for dealing with a man who believes beating the crap out of a woman is a divine right.

Unfortunately for Stella, word of mouth has spread, and she's now got so much business that, not only is her real business-- the sewing shop-- suffering, she can't even have a day off:

Stella picked off the sons-of-bitches one by one, leaving their women free to breathe easy, to live without dread as their constant companion. And now this sideline threatened to overtake her real job, the shop she'd inherited from Ollie, supplying the women of Prosper with sewing notions and keeping their sewing machines in good working order. Every time she thought she'd earned some time off, a new woman would show up, terrified or battered or both, but finally ready to make it stop. And Stella knew what kind of courage that took-- and she never turned a client away.

I liked the character of Stella and her voice, and although I did enjoy the book as a whole, I did have a couple of problems with it. For a woman in her mid-fifties, Stella has a tendency to behave as though she's ten feet tall and bullet-proof-- for example going alone to a deserted area after dark to meet someone when she knows something's not right. Chrissy Shaw, the young mother whose son is taken from her, begins her characterization as the complete blond bimbo-- totally cowed by an abusive husband, unable to think or talk above a slow stumble. Less than twenty-four hours after losing her son, Chrissy goes from Bimbo to Rambo in the blink of an eye. I just find it difficult to believe that someone who's been so completely under her husband's thumb could make such a stunning transformation that quickly.

But, as I said, I did enjoy this book. Stella is feisty and funny, and as long as she's not being beaten up on a regular basis, I can see myself reading this series for a long time to come. A word of caution, however: the language can be salty at times and there is violence. Both fell well within my parameters, but your mileage may vary.


Buy from Amazon.
Buy from The Book Depository.
Buy from an Indie Bookseller.
by Cathy at Tuesday, October 05, 2010