Treasure of the Golden Cheetah by Suzanne Arruda 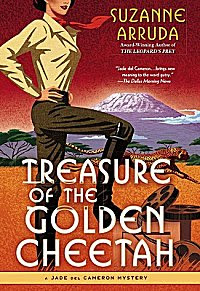 First Line: The woman astride the poppy red Indian Power Plus motorcycle would have been considered beautiful in many cultures.

When I saw that there was a new Jade del Cameron mystery out, I knew I was running behind. Sure enough, there was Treasure of the Golden Cheetah sitting on my shelves staring balefully out at me. Although I do try to keep one unsampled volume of favorite mystery series on hand, I don't want to get too far behind the story. Off the shelf came the book, and I began to read.

It's Kenya in 1920, and Jade finds herself hired on as second-in-command on a safari run by Harry Hascombe. Hascombe has agreed to take a Hollywood film crew to Mt. Kilimanjaro to make a movie based on an ancient legend of King Solomon's lost treasure. Before they even have a chance to leave Nairobi, the producer is stabbed to death by a native who then commits suicide. This death throws a pall over the entire expedition which, once it begins to climb Kilimanjaro's slopes, is beset by deadly hoaxes and serious accidents. Before this is all over, Jade will be glad that she's accompanied by the young healer Jelani and her pet cheetah, Biscuit.

At one time I referred to these books as a guilty pleasure and my "Saturday Matinee Reading". It is past time for me to say that they have involved into much more than that. Jade-- although still talented, beautiful and headstrong-- no longer behaves as though she's ten feet tall and bulletproof. Arruda has done an excellent job in researching the area and the era. (For example, this book had the added bonus of showing us what train travel was like in the Africa of 1920.)  The character of the young Kikuyu, Jelani, not only gives us a look at native life and customs but allows us to see how natives were treated by the white people who ruled the roost.

I enjoy the early motorcycles and airplanes, and being on safari with a Hollywood crew of actors and technicians was in turn funny and exasperating, as Jade discovered: "Sweet Millard Fillmore. Can't these people be left alone for more than five minutes without someone having a hissy fit?"

An added, enjoyable, plot thread is the relationship between Jade and pilot/ filmmaker Sam Featherstone. Both of them are a bit too stubborn for their own good. Neither of them want to live alone. They love each other. But Sam won't think outside the box and Jade refuses to even look inside the box as far as making that final commitment to each other.

This entire series has been a fascinating journey, and I can't wait for it to continue in the next book, The Crocodile's Last Embrace.