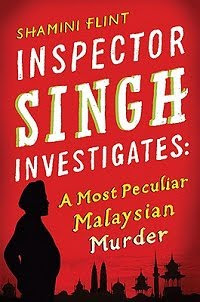 First Line: The accused, Chelsea Liew, was in court.

Portly Inspector Singh is at the top of the Singapore Police's "early retirement" wish list. It seems that Singh is notoriously difficult to deal with, and they just want to wash their hands of him. So when former Singapore resident and top model Chelsea Liew is accused of murdering her husband, his superiors see this as an excellent opportunity to be Singh-free for a while.

In no time at all, Inspector Singh finds himself in Kuala Lumpur complete with an "aide", Sergeant Shukor of the Malaysian police. Singh didn't just fall off the turnip truck that morning-- he knows that Shukor is following his every step not to help, but to spy. Be that as it may, Singh relishes his relative freedom and begins to track down all the "players".

Chelsea Liew was in the midst of a divorce from her wealthy husband, Alan Lee. The most heated part of the proceedings concerned custody of their children. Without warning, Lee informed everyone that he had converted to Islam and declared his children Muslim so only the religious courts had jurisdiction over custody. When she heard this, Chelsea threatened to kill Alan, so when he was found shot to death soon afterward, the police focused on her and no one else. Inspector Singh talks to many people and begins putting pieces of information together. He knows the answer is not a simple "Chelsea did it."

I have to admit that author Shamini Flint had me in the palm of her hand by page 8 of this book when two self-important men are fighting for a better place in line at the airport:

"You heard me, get in line here."
"Behind all these people?"
"Yup."
"You can't do that!" It was the Chinese man.
"I've just done it..."
"I'll have your badge for this!" he stammered angrily.
Singh grinned, suddenly happy. He said, "There's a long queue for that too!"

It's probably got something to do with the fact that I had obnoxious souls in my face trying to intimidate me by threatening to write to my superiors to have me fired. My normal response was to spell my name very carefully to avoid confusion. But to get back to this marvelous book....

Flint seemed to treat each one of her characters with extraordinary care-- even the obnoxious ones. It didn't take long for me to feel as though I'd known everyone in the book for years. Kuala Lumpur is described so well that I feel as though I'd actually been there, and Flint adds just enough information on current events to make the place come to life.

Wonderful characters in a fully realized setting-- and a plot with surprises all along the way. I thoroughly enjoyed Inspector Singh and his visit to Malaysia. I can't wait to get my hands on his other adventures! (I also have a feeling that I know why his superiors want him to retire: he follows the spirit of the law even better than he follows the letter of the law.)