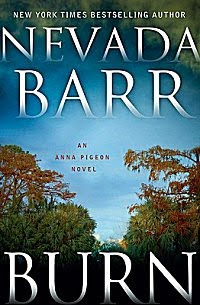 In this, her sixteenth outing, National Park Service ranger Anna Pigeon is still recuperating from the events of Winter Study and Borderline. While her husband, Paul, keeps on working, Anna stays with a friend in post-Katrina New Orleans, little knowing that she's soon going to be fighting for what's right out in the concrete jungle.

While staying in one of her friend's apartments, Anna sees the creepy Jordan, a bartender by night and a "gutter punk" by day. Observing some of Jordan's behavior, Anna comes to believe he's a pedophile. But Jordan is not what he seems, and his connection to Clare Sullivan, an actress whose family was murdered in Seattle, is at the very heart of Barr's powerful plot.

If I'd known how good this book was, I would've kissed Barr when I attended her author signing at a local bookstore. For some reason, I caught on almost immediately to one of Barr's surprises, and I was able to gobble this book up at a fast clip. (In comparison, my husband was listening to the audio version and was confused. When I ascertained that he was within a very few pages of the reveal, I clued him in, and he settled down to enjoy the book, too.)

Anna isn't all that much different in the wilds of New Orleans as she is out in the middle of a national park, as you can see from her thoughts on the local "gutter punks":

These kids were not her brand of criminal. She wasn't well versed in their migration patterns, did not know their natural habitat, what they preyed upon or what preyed upon them-- but people who valued fear and enjoyed pain were scary. Healthy animals, bunnies and foxes and cougars and grizzlies, ran from what frightened them and avoided pain at all costs. When they stopped behaving this way it was because they were sick, rabid.

Anna may not be in Kansas anymore, but her observations are finely tuned.

A word of warning: this book deals honestly and in some detail with the loathsome subject of child sexual abuse and pornography. Did I enjoy the subject matter? No. Did I secretly harbor a tiny little wish that Anna was in a park keeping visitors away from the bears? Yes, for a few pages. However, one of the most important things I've loved about the character of Anna Pigeon throughout sixteen books is that she constantly evolves as a person.

At the beginning of the series, she fought for what she believed in, but if she could get away with staying away from people, that's what she would do. She's kicked her dependence on alcohol, she's learned to trust another human enough to fall in love and marry, she's knowingly coming to the end of her career, and she's still brave enough to fight-- and in fact she puts more of her heart into the battle than she ever did before.

In Burn, Anna found herself in a situation that literally made her sick, but children needed her desperately, and she refused to turn her back. You can't ask for better than that.

Imagine my surprise when I went to Amazon to check out the reviews for what I believe to be an excellent book, and found that it was rated 2.5 stars out of 5. Why? The subject matter.

"There's so much ugliness in the world today that I refuse to read about it for fun."

There's a lot of truth to that statement; however, I can't help but feel that many of these people turning up their noses at Barr's choice of subject matter in this book would also turn their heads and refuse to see when confronted face-to-face with the actual horror. (It's so nasty and uncomfortable, don't you know?)

I read most of the reviews, and it seemed to boil down to a consumer's version of Tough Love: Write about what I want you to write about, or I won't buy your books. I want blue skies and sunshine and cute animals!

Fair enough. I'm happy to let everyone read what they want, as long as I get to do the same. I'll continue to enjoy Anna's evolution as a character wherever she may roam, and I won't tell y'all that Anna will be at Lake Powell the next time she appears. I'll keep all that azure water, sky and sunshine to myself. I don't know about the cute animals, though. I've seen plenty of birds, fish and lizards at Lake Powell....