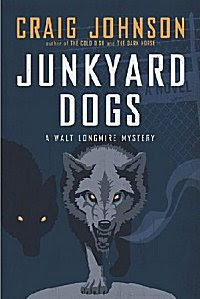 First Line: I tried to get a straight answer from his grandson and granddaughter-in-law as to why their grandfather had been tied with a hundred feet of nylon rope to the rear bumper of the 1968 Oldsmobile Toronado.

It's February, and it's cold enough to freeze the balls off a brass monkey in Absaroka County, Wyoming. As much as Sheriff Walt Longmire would like to stay inside his nice warm jail, folks just aren't going to accommodate him. An old man (and owner of the town dump) has been dragged behind a car. One of his deputies is suffering from "bullet fever", so Walt gives him the task of tracking down the owner of the severed thumb found in a cooler there in the junkyard. His Pennsylvania deputy, Victoria Moretti, is trying to buy a house, and it seems to have made her a tad ill-tempered. The owner of a new housing development that borders the junkyard has to have his feathers smoothed down....

What's a sheriff to do? Especially when an interesting side business is found in the dump followed by the discovery of two bodies. Winter refuses to behave itself (as if it ever has).

It is such a pleasure to read a book written by Craig Johnson. He is a born storyteller. He can make you laugh. He can make you cry. The Wyoming setting and every single character is etched crystal clear in your mind.

There's a reason why I live in the Sonoran Desert: I am not a winter person. I do not "do" cold. When I discovered that this book took place in the winter, I quite literally shivered. However, Craig Johnson is one of the few writers who, for me, can put poetry into a season I loathe. Try this on for size:

It was Monday of the second week in February and people talked less because their words were snatched from their mouths and cast to Nebraska. I had an image of all the unfinished statements and conversations from Wyoming piled along the sand hills until the snow muffled them and they sank into the dark earth. Maybe they rose again in the spring like prairie flowers, but I doubted it.

I have come to view reading a Craig Johnson novel as a visit with a beautiful place, as catching up with a group of characters I've come to know and love, and as an exercise in deduction as I try to identify The Bad Guy. Junkyard Dogs satisfies on all these levels, and Craig Johnson continues to be an author that I wish everyone would read at least once.

I'm willing to bet the farm that, for many of you who do sample his writing, it will be the start of your own love affair with Absaroka County.