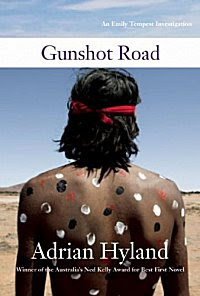 First Line: I closed my eyes, felt the ragged harmonies flowing through my head.

Working as an Aboriginal Community police officer, the half-Aboriginal, half-white Emily Tempest is working the harsh land of northern Australia. It doesn't take long for her to encounter her first dead body-- an old prospector she knew as a child. Trouble is, her boss has already figured out who the murderer is and wants Emily to mind her own business and work the night shift in town like a good little Abo girl. Emily believes the old prospector-- and the man they have thrown in prison--deserve much better than that, and she goes her own way, conducting her own investigation. Emily has never been afraid of getting into a fight, but during the course of her travels along Gunshot Road, she finds the hard knocks to be much worse than she'd anticipated.

This is an excellent follow-up to Hyland's first book, Moonlight Downs (published elsewhere as Diamond Dove). Emily is most definitely an amateur detective; she leads with her heart instead of her head, and she has a tendency to make mistakes. If she's lucky, the mistakes aren't painful, but she's not always lucky. In fact, if you have a strong aversion to violence against women, there is one scene in this book that you will want to avoid. For that matter, Emily's world is dirty and rough. People don't always bathe as often as they should, they use whatever language they feel like using, and violence is often a way of life. Expect grit and realism as you read about Emily.

Having a foot in two worlds, Emily has reaped some of the benefits of the white world: she has furthered her education, and she is a world traveler. However, she cannot and will not ignore injustice, especially to the Aboriginal people among whom she spent her childhood.

Each character in this book seems to fit perfectly into the hot and dusty land, and as much as I enjoy Hyland's plot, pacing and characters, one of the main reasons why I love his books is because of the landscape. It reminds me of my own chosen one:

I wasn't paying a huge amount of attention to the road, I admit-- a nasty habit I've acquired since coming back out bush. Sometimes I even read while I'm driving. Nothing heavy, mind you-- crime, perhaps, maybe a magazine. I'm not the only culprit, I'm sure. Meeting another vehicle out here is an event of such magnitude you tend to get out and talk about it.

Like the Australian Outback, there are places here in the Arizona desert where you can drive all day long and never meet another living soul outside of a snake and a lizard or two. If you do meet someone out in this vast emptiness, you acknowledge each other. You are no longer in the city, and anonymity can get you killed. Although Hyland's territory is an exotic one, it does feel familiar to me even if I don't always understand the lingo.

Story, pacing, characters, setting... these are four very important things to any book, but Hyland adds yet another element that makes his writing stand out: the Aboriginal culture. As much as I enjoyed this book, one sentence engraved itself on my mind because it voices something I've felt for a long time without ever putting it into words: "He bin say you not from here. You move too fast: more better you slow down, take time for the country to know you."

Take time for the country to know you. In Gunshot Road, that is important advice from a people who have learned to live in rhythm with a very special land. Outside of Gunshot Road it is excellent advice for us all to follow.

If you haven't tasted a book written by Adrian Hyland, you've been missing a banquet.
by Cathy at Thursday, June 17, 2010