Eye of the Red Tsar by Sam Eastland 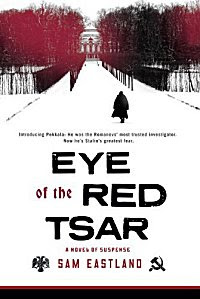 First Line: The man sat up with a gasp.

At one time, Pekkala was The Emerald Eye-- Tsar Nicholas II's most trusted personal investigator. For the past nine years, he has been Prisoner 4745-P in a Siberian prison camp. Given the job of tree marker which carried with it a life expectancy of six months, Pekkala has proven much tougher than anyone expected, and that is a good thing for Stalin.

Human remains have been found in an abandoned mine shaft, and Stalin wants Pekkala to identify them. If they are indeed the bodies of the Romanov family, Stalin wants Pekkala to find the royal family's killers. Even before spending nine years in a Siberian prison camp, Pekkala is no fool, and he knows that Stalin's agenda has more on it than that, but even The Emerald Eye isn't prepared for all the twists and turns this investigation will throw at him. All he knows for sure is that he will investigate because Stalin has promised Pekkala his freedom if the case is concluded successfully.

For anyone who loves tsarist Russian history, the beginning of this novel is memorable, and as I read the opening pages, I hoped that this new perspective would mean that I was in for a reading treat. Even so I was surprised by how much I didn't want to stop reading this book. If I could have ignored all obligations, I would've happily read Eye of the Red Tsar in one sitting, proving without doubt that I can be the worst biblio-glutton.

As I learned more about Pekkala's childhood in Finland, as I learned how he met Tsar Nicholas, as I watched him follow each lead and talk to anyone who might have the slightest bit of information, I was in Siberia in 1929. The plot moved quickly and was full of switchbacks, only some of which were easily deduced, and when I read that Eastland's next Inspector Pekkala novel is expected in 2011, I got a huge smile on my face.

Even the thought of another Pekkala novel makes me smile right now.
by Cathy at Thursday, June 10, 2010