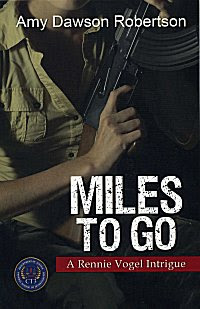 First Line: John MacPherson pushed through the doors of the Academy fitness center and drew the crisp morning air deeply into his lungs.

In order to get funding for an international counterterrorism tactical team, it is ruled that women have to be allowed to train for it and to become members. Rennie Vogel wins her spot fair and square, but when a mission in Iran goes horribly wrong, Rennie must find the strength to battle her way out alone.

When the author contacted me about this book, I came very close to saying no. I tend to avoid books that involve spies, terrorism and the like. To each his own, eh? The reason I agreed to read this book is because of the main character. Rennie sounded like such a strong, interesting woman that I felt compelled to say yes. I'm glad I did.

Rennie Vogel is just the sort of female character I like. She has to earn everything she gets; nothing is handed to her; and she can think on her feet. When the team lands in Iran, everything goes wrong. Rennie finds herself faced with the decision of trying to complete the mission and making it to the rendezvous, or forgetting the mission and just trying to save her own skin. The decisions she makes, the reasons behind them, and the ensuing action are, by far, the strongest part of the book. Robertson had my complete attention.

However, a few things didn't gel well for me. At the beginning of the book, the reader is told multiple times that the mission is being sabotaged in order to prove that women are not worthy of being members in elite operative groups. By book's end, little to nothing is said about this. I don't need every loose end tied off by the last page of a book, and I certainly don't need happy endings, but this one thread bothered me. I wonder how it would have worked to have the primary person who wanted the mission to fail snarl and think to himself, "She won't make it the next time!"

Another thing that didn't work for me was the addition of a love interest for Rennie when she's trying to complete a dangerous mission and make it back home alive. (I would have preferred more story about the woman back in the U.S.) This probably says a lot more about me than it does the book. I don't care much for fictional romance to begin with, and in the case of Miles to Go, I had myself deep in enemy territory trying to make my way out alive. If any sort of romance had reared its head at that point, I would have slapped it clean off. But that's me.

One last thing that I felt needed improvement was the length of the book. It needed to be longer. I hope you were sitting down when you read that. Normally if I make any sort of comment about a book's length, it's to complain about it being too long. In the case of Miles to Go, I think there needed to be a few chapters showing Rennie working with the newly chosen team and the actual day-to-day problems she had to face. Being told about them just wasn't enough. Rennie as a character and the book as a whole would be much stronger for it.

Would I read another book about Rennie Vogel? Yes, I would. She's a fascinating character!
by Cathy at Thursday, May 20, 2010