City of Shadows by Ariana Franklin 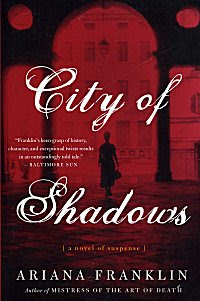 First Line: If Ignaz Stapel hadn't been so afraid of his father, he would have reported the incident and perhaps saved the lives of all the people who were to die as a consequence of it.

It's 1922 in Berlin, Germany. Inflation is mind boggling, the German government seems paralyzed, anti-Semitism is at an all-new high, people are starving, and Hitler is on the rise. Esther Solomonova has managed to find a job as secretary to pseudo-Russian nobleman, Prince Nick, who's the owner of several night clubs in Berlin. Nick finds an inmate in a local insane asylum who claims to be Grand Duchess Anastasia, the sole survivor of the slaughter of the Russian royal family. Nick installs her in an apartment with Esther, beginning his quest to get his hands on the wealth of the Romanovs. However, a mysterious Nazi is trying to murder Anna, and people close to her begin to die.

I have always had a fascination with Tsarist Russia-- in particular Nicholas and Alexandra and their children. As a result, the history of Anna Anderson has also captured my imagination. Franklin uses all this and the backdrop of Berlin to stunning effect. She made me see the hopeless struggles of the German people against runaway inflation and how desperation could make them turn to anyone or anything that seemed to have a solution.

Esther is a beautifully drawn character. Her horrible disfigurement in a pogrom, her strong moral compass, her intelligence... Franklin made me care about this woman, made me wonder how she was going to get away from Prince Nick's schemes, made me hope that she would escape the murderer who was after Anna.

And Franklin had certainly done her homework on Anna Anderson. Although we'll never know what made Anderson jump off that bridge in Berlin, the author's inventions are entirely plausible. In fact, she had me so wrapped up in Anderson's story that I was stunned by the neat twist at the end of the book.

Franklin's depiction of Berlin in the 1920's, her use of the riddle of the woman who was called Anna Anderson, the steadfast and mysterious character of Esther Solomonova, and a frightening murderer in the shadows all combined to make City of Shadows one of the best books I've read so far this year. If you enjoy historical mysteries, I certainly hope you'll give this one a try. As a person who has yet to sample Franklin's more famous Mistress of the Art of Death, I can't help but feel that I have a real treat in store for me!
by Cathy at Thursday, April 29, 2010