The Darkest Room by Johan Theorin 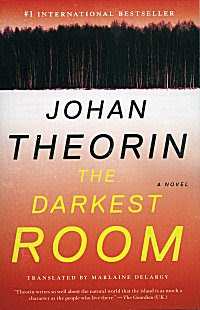 First Line: Valter Brommesson is sitting in a little stone house at Eel Point, praying to God with his hands clasped together.

Schoolteacher Joakim Westin has finally tied up all loose ends and has made the move from Stockholm to join his wife Katrine and their two small children in their new home on Eel Point on the island of Öland. Katrine has made great strides in remodeling the large home while Joakim was in Stockholm, and he's looking forward to joining with her to finish it up.

One day Joakim comes home to discover that Katrine has drowned in shallow water near Eel Point's twin lighthouses. Although the police proclaim it an accident, Tilda Davidsson, a cop new to the area, isn't convinced and conducts her own investigation in her free time. And while a burglary ring breaks into summer homes and Tilda quietly gathers information, the grieving Joakim and his children feel that Katrine is somehow still with them.

Once again the setting is Öland, an island that the author is very familiar with, having spent many childhood summers there. Theorin's family, sailors and farmers, has lived on the island for generations. His physical knowledge of the area has combined with the stories and the history of the place to make wonderfully atmospheric books. The Darkest Room, in many ways, is even more atmospheric and horripilating than his first book, Echoes From the Dead, which I also loved.

A thin thread links this second book to the first, since Tilda Davidsson is the great niece of Gerlof Davidsson who played such a large role in Echoes From the Dead. Joakim Westin grieves so much for his wife that it's not always certain whether what he's seeing and hearing is really there. The three burglars are unpredictable, and that increases the sense of unease. And then Theorin weaves in the stories and histories of Eel Point from several generations. Each story explains a bit more. Each history illuminates another small dusty corner.

A house built with timber that dying sailors had clung to in despair before the sea took them-- should my mother and I have known better than to move in there at the end of the 1950s? Should you and your family really have moved there thirty-five years later, Katrine?

If you don't believe in spirits or places that are haunted by their histories, you may very well undergo a sea change while reading The Darkest Room. Within the space of two superbly crafted books, Johan Theorin has become one of my favorite writers.

Now if I'd just stop sitting here looking over my shoulder....