Bones in the Desert by Jana Bommersbach 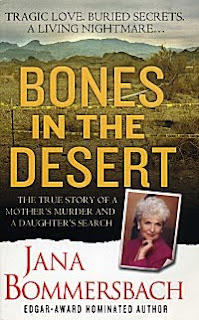 First Line: It's one of those cute pictures you blow up and frame because it's not only flattering, but shows such a happy couple at such a happy moment.

Loretta Bowersock knew how to raise a family, how to run a household, and how to be a successful businesswoman. Together with her daughter, Terri, she ran a multi-million dollar furniture store based in Tempe, Arizona. Although it sounds as if Loretta was the epitome of the Modern Woman, she wasn't. She was a child of her times who didn't feel complete without a man. Enter Taw Benderly, a legend in his own mind. He swept Loretta off her feet and stole her heart. In the process, he alienated mother and daughter.

For over twenty years, Benderly wormed his way into every facet of Loretta's life. He was controlling and abusive, and rather than throw his sorry hide out of her house, Loretta was convinced that she needed a man, and she was too old to start over again. This lovely older lady believed that she'd made her bed, and the only thing she could do was to lie in it. That is, until she discovered just what a despicable excuse for a human being Benderly was.

Loretta's daughter Terri knew that things weren't right between Benderly and her mother, and she'd tried to get her mother to see reason, but Loretta would have none of it. Terri had no clue just how abusive Benderly was until her mother disappeared shortly before Christmas, 2004. It would be over a year before Terri Bowersock knew everything that had happened to Loretta.

Bommersbach quickly turns what could have been a rather simple tale of murder into a multi-faceted story of a daughter's love, endless months of searching out in the desert, and a heart-breaking case of elder abuse. This is a story that has been told with great compassion because it is very personal to Bommersbach:

I couldn't get her out of my mind. I'm exceptionally close to my mother, and I knew Terri had been close to hers. My mother, Willie, is the single most important person in my life, always has been, always will be. I can't even imagine the day I'll lose her.... What if someone stole her from me? What if someone hurt her, and made her suffer?

Back in the 70s and 80s, I read quite a bit of true crime, but I stopped when it seemed to become repetitive and aimed at sensationalism. Living in the Phoenix metropolitan area as does Terri Bowersock and Jana Bommersbach, I was familiar with this case. I saw it being discussed on television. I've read several things that the author has written. I've seen her on television, and I've come to respect her opinions. I'm glad I steered myself back to the true crime genre for this book. I was in the mood for a book that not only was informative but that also showed how deeply the author cared about the subject.

Bones in the Desert delivered splendidly on all counts.