The Rule Book by Rob Kitchin 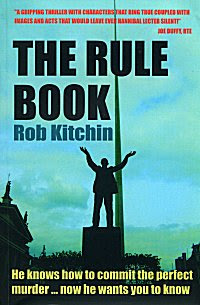 First Line: His eyes fixed on the sword and started to travel its length, down from the black handle, over the plain hilt and along the two-inch wide shaft to where it penetrated the young woman's mouth.

At the beginning of The Rule Book, Colm McEvoy is already a man on the edge of the abyss. A Detective Superintendent of the National Bureau of Criminal Investigation in Dublin, Ireland, he's still mourning the death of his wife from cancer while trying to adjust to being a single father. He's lost so much weight that his suits hang off him, and he's trying to stop smoking, since that's what killed his wife.

Responding to a call about a murder at the Glencree Centre for Peace and Reconciliation, McEvoy finds the body of a young woman who's seemingly been sacrificed... and Chapter One of The Rule Book, a self-help guide for prospective serial killers. Less than twenty-four hours later, a second body is found along with Chapter Two. When the third body (along with another chapter) is discovered, it's plain to see that the self-proclaimed "Raven" fully intends to slaughter one person per day until The Rule Book is published in its entirety. The case garners worldwide press, and with media, police and political pressure increasing by the hour, the shaky McEvoy must find The Raven.

Two characters lured me deeper and deeper into this book: The Raven, a serial killer who's completely convinced of his own brilliance, and Colm McEvoy. The sole maternal bone in my body is microscopic in size, but somehow Kitchin made me want to mother the detective superintendent:

"Well, hopefully, we can grab him before he has a chance to kill," McEvoy said without conviction, rubbing his face, exhausted. His left hand had started to shake again. He tried to still it, but it wouldn't respond to instruction. All of his muscles felt tight, aching with tiredness and stress. He tried to roll his shoulders to ease the pressure thinking that if someone was to tap him with their knuckle he would probably sound a middle C.

After some uninterrupted sleep, good meals, clothes that fit and some nicotine gum or patches, I could've helped McEvoy solve the case much quicker. (Or do I have a touch of The Raven's ego?)

I found the investigation compelling with a minimal amount of gore. Although I was quite good at seeing which leads McEvoy needed to follow, I was no good at identifying The Raven until just a few pages before the unmasking. With the storyline and pacing-- and especially with the character of McEvoy-- I'm hoping that The Rule Book is the first in a series featuring the detective superintendent.