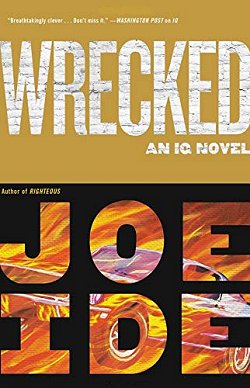 First Line: "Do you know what Abraham Lincoln said after a six-day drunk?" Jimenez said.

Isaiah Quintabe-- IQ for short-- is learning that success is no cure for loneliness. A series of successful solutions to high profile cases means that he can't even go to his neighborhood store without being recognized. His sidekick, Dodson, is now his partner and has decided that he's going to straighten out the company finances. No more chickens, sweaters, or lawn mowing in exchange for IQ's services.

But this is a concept that IQ just can't get his head around. When a young artist asks for his help in finding her mother, it's not the fee he's looking to earn, he wants the human connection. Unfortunately, that human connection leads him right into the middle of a deadly paramilitary organization, and everyone's life is now in danger.

Before I go any farther, I'll issue a warning. If you cannot tolerate or have a low tolerance for torture, you might want to give Wrecked a miss. None of the scenes are graphic-- Ide knows how to let your imagination supply most of the details-- but neither does he pull any punches in telling readers what happened. I have a high tolerance for such things, but even I was uncomfortable at times. Also, the torture is not gratuitous; it illustrates just how bad the bad guys are... and that IQ isn't Superman. But enough of that.

One of the reasons why I enjoy this series so much is that Joe Ide takes me right into the heart of the 'hood. It's a place I'd never think of going on my own, but I'm in good hands with him. I see how people live, how they think, how they talk, and how they behave. My entire visit is an emotional roller coaster. Sometimes I'm disgusted. Sometimes I get tears in my eyes. And sometimes I laugh myself silly... but that happens when I read books set elsewhere. You see, there are a lot of similarities between the 'hood and the "normal" parts of town. Some folks just don't want to admit it.

Wrecked isn't just about torture. It's also about love. How does IQ fare with the woman he loves? You'll have to read the book. How does Dodson fare with his ladylove when he keeps doing things she disapproves of? You'll have to read the book. Joe Ide's one-line descriptions may be the soul of wit and observation, but it's his characters that I love the most, and boy, there's a character in this book that made me laugh so much I was almost howling. Junior is a bad guy. A very bad guy. But he's also Mrs. Malaprop on steroids and methamphetamines. How Junior made me laugh! He's almost worth the price of admission all by himself.

But there's an engrossing story here, too. The bad guys were loathsome, and I couldn't wait to see how IQ and his posse made them pay for their crimes. What a ride! Fortunately, I don't have long to wait for the next book in the series. Long live IQ!