The Satapur Moonstone by Sujata Massey 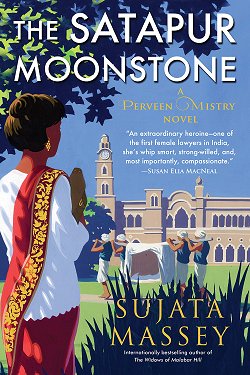 Things are not going well for the royal family of Satapur. The maharajah died of a sudden illness shortly before his teenage son died in a hunting accident. Now the state is ruled by an agent of the British Raj, so when the two maharanis become entangled in a dispute over the education of the crown prince, someone must be sent to straighten things out. Since the two women live in purdah and do not speak to men, there is only one person who can do the job: Perveen Mistry, Bombay's only female lawyer.

Determined to bring peace to the royal house and make a sound recommendation for the young prince's future, Perveen finds the royal palace a nest of cold-blooded power plays and long-lived vendettas. Her life-- and the lives of the royal children-- are in very real danger.

Massey is so very adept at guiding readers into the world of India in the 1920s. A world of arcane rules that mainly benefit British colonial rule. A world that, with the help of people like Mahatma Gandhi, is beginning to fight for its freedom. A world of incredibly wealthy maharajahs in independent states whose palaces have bronze doors and rubies inlaid in the floors. But she also shows how claustrophobic this world is. The jungle tightly wraps itself around Satapur Palace, a jungle containing all sorts of creatures that attack and kill humans. A jungle that has few paths to travel and whose rainy season makes those paths impassable and shuts the royal family away from the rest of the world.

In many ways, Satapur mirrors the rest of India. India is beginning to fight for its independence. Satapur has an old palace as well as a new palace which merges with the old to form an uneasy whole. In this divided palace live two maharanis: the dowager who refuses to relinquish her power, and the new who wants her son to have the sort of education that will help him guide his state into a brighter future.

Perveen has her work cut out for her. Somehow she has to remain true to herself while moving amongst the often overweening British, various religious factions, and dozens of royal protocols. It's not easy. There are many loathsome undercurrents simmering away in the palace. There are eyes and ears everywhere. How can she decide whom to trust?

The Satapur Moonstone immerses readers in a different world. The story is claustrophobic, its mood ominous, and it has the most delicious sense of suspense. It's not necessary to read The Widows of Malabar Hill before undertaking The Satapur Moonstone, but why deny yourself the pleasure of experiencing two excellent novels? Needless to say, I am eagerly awaiting the third book!