The Disappeared by M.R. Hall 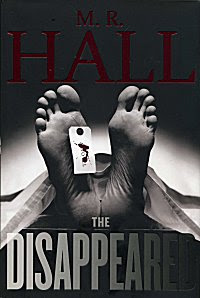 First Line: During her six months as coroner for the Severn Vale District, Jenny Cooper had known only a handful of corpses to remain unidentified for more than a day or two.

A distraught mother asks Coroner Jenny Cooper to declare her son legally dead. Eight years ago her son and a university friend disappeared. After a rather shoddy police investigation, Mrs. Jamal has been in limbo. She needs closure.

Cooper is hesitant to accept the case, especially when the police tell her that the two young men are believed to have fled to Afghanistan to join al-Qaeda. Mrs. Jamal is adamant that her son was not an extremist. As Jenny's investigation broadens, she meets with resistance, not only from the police, but from MI5 who start talking about national security.

Jenny Cooper is a very interesting, and very flawed, character. She suffers from acute anxiety and depends upon medication to keep herself together. She's raw from a nasty divorce. She's trying to be a good parent to a difficult teenaged boy. The man in her current relationship wants commitment, and her job is stressful and demanding. She's trying to give 110% to each facet of her life, and there are times when she almost comes unglued.

My favorite parts of the book involve the inquest when Jenny has to face down all the people who are trying to sweep these two young men under the rug. Jenny refuses to back down. She refuses to accept anything but the truth and justice. She can face up to anything, but when the pressure is off and she's alone, her anxiety kicks in, and she starts coming unraveled.

At times it felt as though there were too many bad guys with too many motives wanting to stop Jenny. Each new villain and each new motive were explored, and this caused problems with the pacing of the book. I got the feeling I was a passenger in a car with a faulty clutch. Herky jerky. Stop and go. It was frustrating.

This is the second book in the Jenny Cooper series. The first is The Coroner which hasn't been published in the United States. I feel as though I should warn potential readers of something. The dust jacket of the book trumpets "in the best-selling tradition of Patricia Cornwell's Kay Scarpetta." Don't you believe it. Jenny Cooper is nothing like Kay Scarpetta, primarily because a coroner in Great Britain does not conduct autopsies. British coroners are concerned with the legal aspects... inquests and the like.

I liked Jenny, but did I like the book enough to read others in the series? The jury's still out on that one.