Flowers Over the Inferno by Ilaria Tuti 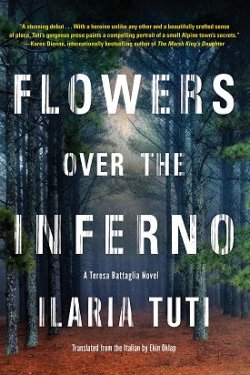 First Line: There was a legend that haunted that place, the kind that clings like a persistent odor.

In a small village in the Italian Alps, the first victim in a gruesome string of murders is found. Superintendent Teresa Battaglia has a background in criminal profiling and is called to head the investigation. Massimo Marini, a city detective, is added to her highly trained and competent team.

It is a difficult investigation. Going without proper food or sleep, Battaglia tries to unravel a historical angle that threatens to endanger a group of eight-year-old children towards whom the killer is gravitating.

With the insular village fighting them every step of the way, sixtysomething Battaglia is battling exhaustion, illness, and the knowledge that her mind and body may fail her before the investigation is over.

The first third of Flowers Over the Inferno made me despair. The opening is a bit clunky and as the author set her stage, I found it difficult to become engaged with the story. But I kept at it-- mainly because her descriptions of the landscape create an atmosphere that's at once magical and foreboding. In fact, the landscape becomes a major character in the book. More than anything else, I think it was the transitions between the main narrative and the intermittent chapters taking place in a creepy old building in Austria that caused this reader's troubles-- even though those chapters made the hair stand on the back of my neck along with their mantra of "Observe, record, forget."

Then there are the children: Mathias, Diego, Lucia, and Oliver. The more you learn about them, the more you will admire their resilience, intelligence, and bravery. And when the story finally settles down to the investigation, fasten your seatbelts: Teresa Battaglia is one of the best characters I've come across in a long, long time. In her mid-sixties, Teresa is single, alone (and not enjoying it), overweight, diabetic, and has a razor-sharp intelligence. She does not suffer fools gladly, but you will seldom ever find a character who has more empathy and compassion. As tiny pieces of her backstory are told, your admiration of the woman grows. Her mere presence makes those who stand by her feel stronger; her team is utterly devoted to her. When you add to that mix a city detective who needs more than a bit of training, sparks can fly. But as he learns, Massimo Marini's opinion of Teresa Battaglia changes. In the beginning, each time he underestimates her, she steamrolls right over him, so it's fun to watch their relationship develop.

If not for that clunky beginning, Flowers Over the Inferno would be on my Best Reads of 2019 list, but it comes very, very close. There are supposed to be two more books featuring Teresa Battaglia, and I can't wait to get my hands on them. She is a fantastic character! (Think Vera Stanhope and Ruth Galloway, you fans out there.)